History of The Queen’s Beasts

The Queen`s Beasts Silver Bullion Coins are 10 legal tender silver bullion coins each featuring mythical creature. The ten beasts are representative of the heraldic crown of the Queen, and are depicted in different positions on each coin to represent the different crowns in Her Majesty`s Royal Collection.

The series comes in ten-ounce and 2 ounces .9999 fine silver.

Today, The Queen’s Beasts can are located at the Canadian Museum of History in Quebec. Whilst the replicas of the Queen’s beasts’ sculptors stand in Kew gardens. The creatures were displayed on the day of The Queen’s coronation in 1953.

How many Queen’s beast coins have been released todate?

Royal Mint took a challenge to create the 10 heraldic statues in 2oz and 10oz pure silver, calling the series ‘The Queen’s Beasts Silver Coin Collection’. The Royal Mint used the skills of Jody Clark, whose official portrait of The Queen features on the obverse of every coin issued by The Royal Mint. The first release of the 2oz Queen beast silver coin series was ‘The lion of England’. 2016 The Lion of England round bullion had a Majestic crowned ‘roaring’ Lion holding a shield heraldic rose at its centre.

What are the 10 Queen’s Beasts and release dates of 2oz and 10oz Coin Series? 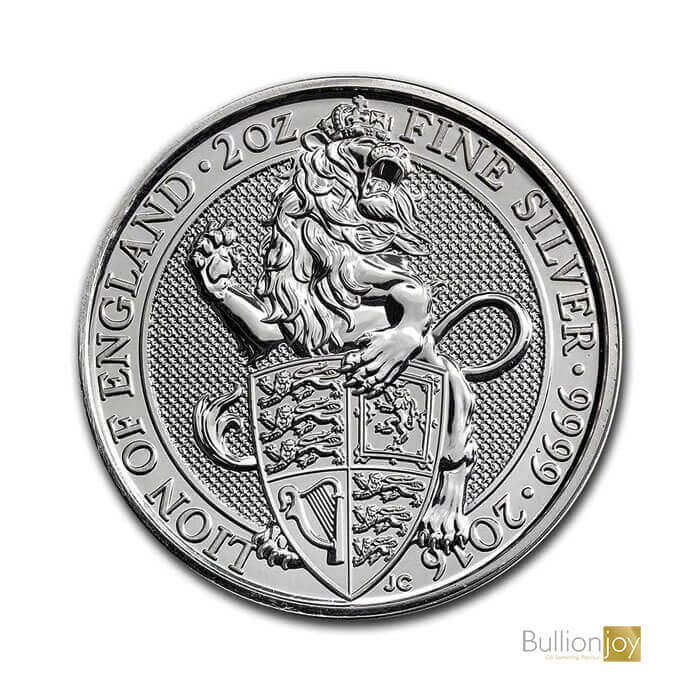 The physical Queen’s Beasts Bullion Series of second edition silver coins were first released in the year 2016 – 2017 and continue to be issued year on year. The Queen’s Beasts bullion coin series consists of 10 different design types and has already included the Lion of England, Griffin of Edward III, Black Bull of Clarence, White Lion Mortimer, White Horse of Hanover, Falcon Coronet, Red Dragon of Wales, Unicorn of Scotland. There’s a perfect place for this highly collectible bullion coin for any precious metals portfolio.

The Queen’s Beasts Collection is not limited to silver but also includes a beautiful range of 1 oz gold and 1/4 oz of 24ct pure gold fineness of 999.9 giving you a choice of desirable, collectible range. These coins have a face value in pounds of 100 and 25 respectively, however, their intrinsic value is based on the gold content of the coin, coupled with the collectability of that particular design.

Shop our range of 2oz British Silver Coins to add to your collection today.

Any cookies that may not be particularly necessary for the website to function and is used specifically to collect user personal data via analytics, ads, other embedded contents are termed as non-necessary cookies. It is mandatory to procure user consent prior to running these cookies on your website.

Subscribe to the Bullionjoy newsletter to receive timely market updates and information on product sales and promotions.